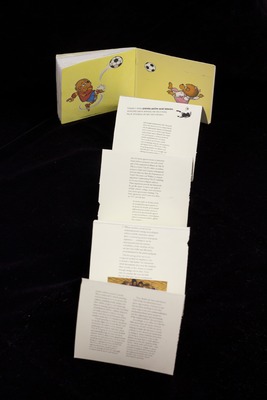 Artists' Statement: As a devoted female athlete I wanted to show how far women's athletics have come. Growing up the Berenstain Bears series was one of my favorites, which is why the book caught my eye sitting on the self [sic]. It was not until late that I opened it up to discover that brother bear took center stage exploring the world of sports while sister bear was left in the background. As a tribute to the 40th anniversary of Title IX I presented an article expressing what females [sic] athletes have accomplished since the title IX enactment in 1972. Boys will no longer dominate the world of sports...sister bear will now be a force to reckon with.'