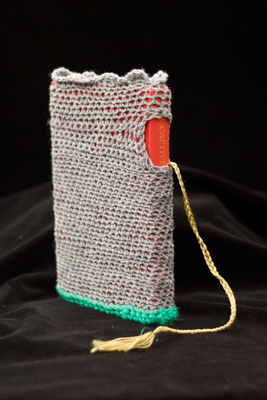 Artist Statement: My mother thought I was going to become a writer. I used to pretend that I could write, before I actually could. The library books I ruined I am told were countless. I just had to write down my own story next to the pictures because I could not read the book's words. After I could read and write I started to draw. I drew my own characters to stories that I had read. I made my own language, which these drawn illustrations spoke in. I started to want to make the magic in the stories I loved come alive. I have not grown up. The magic is real; it is just that not everyone can see it. I still believe in story telling just as much as I believe in fairies. I just have found another medium to use to write. In the piece "Captive" I am taking a fairytale that we are all familiar with and contextualizing it into an artist's book. Just like the princess in the story who is captive in a tower, my book is unable to be opened, unable to be read. I have captured its contents.